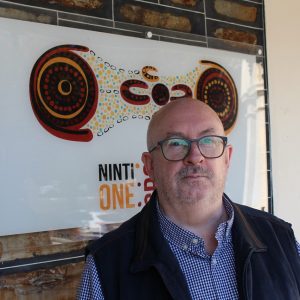 Before joining Ninti One in March 2022, Dan was the Chief Executive Officer of Alice Springs-based Desert Knowledge Australia and Managing Director of the Desert Knowledge Research Institute. These two organisations aim to improve the wellbeing of desert peoples, support economic development and work towards environmental sustainability in the desert regions of Australia.

From 2017 to 2019, Dan was CEO of Aboriginal community-controlled Sunrise Health Service Aboriginal Corporation based in Katherine. Sunrise provides primary health services to 4000 Aboriginal people and is one of the largest Aboriginal Community-Controlled Health Organisations in Australia.

Dan has also been a director of the peak body Aboriginal Medical Services Alliance of the NT (AMSANT) and vice-chair of Katherine Regional Aboriginal Health and Related Services. Dan continues as an independent member of the AMSANT Research Sub-Committee. He was a member of the Central Region Executive of the Chamber of Commerce NT, ‘Innovator in Residence’ representing the NT Government for Central Australia and a board member of ‘Inspiring Australia’ (NT Branch).

In June 2021, Dan was appointed by the SA Health Minister as a council member of the Health Performance Council of South Australia. Former Federal Minister for Indigenous Australians, Hon Ken Wyatt, appointed him to the Indigenous Reference Group as part of a national group to support the Federal Government implement the National Roadmap for Indigenous Skills, Jobs and Wealth Creation program.

Dan holds a PhD from the Australian National University and has worked extensively in the ‘mainstream’ acute and community health sectors, mining sector, Aboriginal and Torres Strait Islander economic development and health.

On his mother’s side, Dan is descended from the Traditional Owners of the Winton-Longreach region of Central Western Queensland.