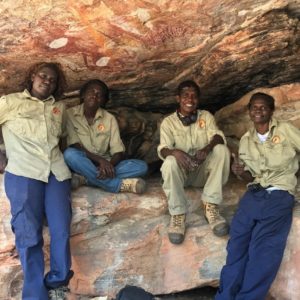 The land of West and Central Arnhem land is diverse and challenging, ancient and culturally rich, dating back 50,000 years. In 2010, the traditional owners of the Warddeken and Djelk Indigenous Protected Areas combined to create a Trust that has connected philanthropy to programs that have shaped women’s employment, cultural heritage management, education on Country, conservation and environmental outcomes. Part of that has been the Warddeken Daluk (Women’s) Ranger program, supported by the Klein Family Foundation, that has seen ranger hours worked by women more than double in the first two years of the project. The Karrkad Kanjdji Trust – a reference to the Kuwarddewardde or Arnhem Land Plateau – is the recipient of the Indigenous Philanthropy award.

The daluk rangers’ work is about protecting nature and cultural heritage. It is known as the stone country, where conditions are harsh and feral animals, wildfires and invasive weeds are just some of the issues. In addition, the rangers work on maintaining cultural sites. But the transformative power of the program has been to recognise, and then tap in to, the cultural knowledge that is often gender-specific and only held by female elders. Traditional owners knew that unless there was a way of passing on that knowledge, there was a risk it would be lost forever.