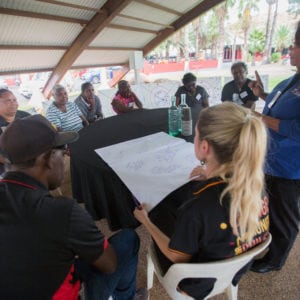 CANBERRA — Ninti One has become the first Indigenous-owned and operated supplier to be a lead contractor supporting the Department of Foreign Affairs and Trade on an aid project based outside of Australia.

Following a competitive tender process, Ninti will be conducting a mid-term review of Australia Assists, an Australian aid program that deploys specialists to work with governments, multilateral agencies, and communities for emergency preparedness and response. Fieldwork in Vanuatu, Fiji, and at the Rohingya refugee camps in Bangladesh will take place as part of the contracted work.

This new engagement in the aid program will see Ninti take an important step into the supply side of aid with previous contracts awarded focused on the corporate side of aid — including data management and procurement support.

While the contract is small in aid terms, worth an estimated $145,000 Australian dollars ($98,000) and a deadline to complete the review by October, Ninti Chair Professor Tom Calma called it a “breakthrough” for Indigenous business to showcase the value it can add to the aid program by leading the delivery of services in complex overseas contexts.