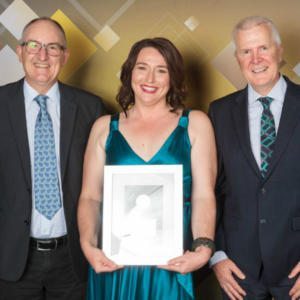 And the Chief Minister’s Medal goes to…

We’d like to congratulate Sally Leigo, Principal Research Leader of the Precision Pastoral Management Tools project, who won a Chief Minister’s Medal at the Northern Territory Government Awards for Excellence in the Public Sector.

This prestigious award recognises individuals in the public sector who have demonstrated outstanding and commendable public service. Only nine medals were awarded across the entire Territory.

Sally, who works for the Department of Primary Industries and Resources, has forged tremendous relationships and made a significant impact in the cattle industry by leading the development and implementation of the Precision Pastoral Management System for the CRC-REP. From the office to the most remote cattle station, Sally’s professionalism, enthusiasm and energy is a primary resource we’re grateful to have on board.